I’ve been yearning hard, like a cross-fit addict after their Theragun, (now come on fitties, is that really what you’re using it for?) for the year that John Lewis moves on from the tired and tested Christmas tropes with which we’ve become obliged to accept as ‘the standard’. You know how it goes, simple problem/solution scenario with an imaginary weirdo type-a-thing? But now, when they do produce something more tangible, I’m ashamed to say I’m a bit underwhelmed. There’s no pleasing some people is there?

But these are difficult times (a quid for every time that phrase gets rolled out over the next… well… years please) brands need to be seen to be helpful and not spend vast amounts of cash on frivolity and entertainment. And, it’s for a good cause, so I’ll stop being a dick.

Unfortunately, the model applied to music remains largely unchanged, the only difference being JL have chosen an existing pallid re-recording of a well-known song rather than create their own (most likely because, in this case, it’s probably cheaper). Blink 182’s All The Small Things is given the lounge treatment by Puddles the Clown and Scott Bradlee, (I’m not making this up…).

Skater Rock, but not! See what they did?

“I was not born in a vacuum. Every thought I have belongs to someone else.” – Lenny Bruce.

ALDI; not afraid of a pastiche at Christmas, are they? Still, the ‘give the people what they want’ creative mantra is probably a good bet in these difficult times (£). Credit to ALDI and McCann though, this is a comedic visual feast and, never has a carrot avatar represented like its real-life muse than this one of the incredible Catherine O’Hara (I wish she was my Mum).

There’s a knob gag in the film too… something for everyone!

The score, a direct lift from the Elf soundtrack and some original embellishments, sadly takes a bit of a back seat, which is a massive shame given its richness in arrangement and production from Comrade Farley (AKA Father Christmas) at the helm. The mix should have allowed more music and less SFX, honestly no one cares about SFX.

Let me at those (mixing) knobs.

They’ve basically become John Lewis at Christmas, haven’t they? Jerk out the tears.

The idea that all a boy really wants for Christmas is his family together is rather sweet for humans, but what the Fillet o’ F*cking Fish has that got to do with cheap fast-food?

We should talk about the music, shouldn’t we? Those of you with a memory will recall Boots re-recorded this song for their Christmas ad with the actual Alison Moyet in 2017 (she sang on the original release from 1982 as one half of Yazoo, her then band with Vince Clarke. Vince Clarke was in Depeche Mode for a bit before forming Yazoo with Moyet and after Yazoo split formed Erasure with Andy Bell… I knew this shit would come in useful one day.)

Without doubt, this film would have been better if McDonald’s had borrowed Boots’ recording or used Yazoo’s original, or the Flying Pickets accapela version.

This John Lewis version just isn’t as good as any of those.

You know I’m right. Maybe it would’ve cost too much, these are difficult times (£).

This is fun. All the family character stereotypes at play are forged in an apt representation of modern life, i.e. in a hurry somewhere. And despite my woeful inability to emote on any level, I think it might be empathy I’m feeling with/for the couple awaiting the impending stampede of siblings, destructive niblings, grandparents, drunken single aunts, dodgy uncles…

Of course, you’ll recognise the orchestral take on Opus’s Life is Life underpinning the action; interesting because Argos used this last song last year, which is a smart move from a brand recall perspective. Although, a year on, I’m still trying to make the connection between Argos and Life is Life?

Regular readers of this column (which include my Mum, some colleagues and our long-suffering PR company) will recall that I said less than kind things about last year’s recording of the song, but on balance, I quite like this version.

Discussing this spot yesterday, it seems that for many Gen Zs, the timeless life skill of high 5-ing is “totes cringe”!

Why the hell don’t they tell us this stuff until it’s way too late? Us late Gen Xers are always very happy to tell them about all the shit that we hate about them. Anyway, it goes some way to explaining the premise of this ad.

Huge props for not using Christmas music, instead an always welcome airing of Cerrone’s 1977 classic Supernature.

Do check out the original album art for this release and let me know wtf that’s about, if you get time.

For fans of the movie Elf, this a hugely welcome return of Buddy, THE personification of Christmas joy and proof that Will Ferrell is one of the finest actors of the modern era. As I watchedm I mused if ASDA approached Ferrell to revive the character, but learning that he rejected a $29m fee to revive ‘Buddy’ for Elf 2 it was probably a non-starter. These are difficult times (£).

Added to that, the post-production community of London would probably have been shivering in the dark this Christmas had Farrell said yes, because they would have missed out on working on the biggest Christmas gig of 2022. It’s a highly accomplished re-work/cover version/parody, (what do you call this visual treatment?).

Music supplied by old blue eyes, #easy. Although, as the title of the tune suggests, this film isn’t about Santa so I’m a bit confused about the choice, and, for me, vocals and dialogue clash in places, something easily fixed with a tasty re-record.

I wonder which came first, this script or the recent revolving door at Downing Street?

Either way, the idea fits neatly into the increasingly terrifying climate of governmental incompetence we currently bask in. I dare say most of Tesco’s workforce (and some of the advertising community) would have faired better than The Human Hand Grenade and Kamikwasi in their recently departed roles.

Now, I know I’m not the first to comment on the gratuitous amount of food on display here, and Tesco isn’t alone in this, but as I masticate slowly and methodically through the Christmas offerings from brands, in a not dissimilar similar fashion with which I will attack the food mountain acquired and presented as essential by this kind of advertising content; I feel a sense of impending guilt, which is not healthy mid-November.

What…. is this our last Christmas then?

Is it bad I’d never heard of Alison Hammond before this week?

I’m told by Lizz she’s a ‘hun icon’. Isn’t that a breakfast cereal? Lizz also tells me Alison should be the next Prime Minister. Fair shout. Lizz also writes a column about music in advertising [read it here].

Unlike John Lewis, no expense was spared here. Elaborate and lush in all departments – casting, wardrobe, VFX, props, a fuck tonne of food (see above for my thoughts about this).

A pseudo-medieval take on Teenage Dirtbag by Wheatus provides the soundtrack, which I can only hope is a firm two-fingers from W+K to the rest of the advertising community who relentlessly conform to the idea that a meaningful re-record is “just what we do” at Christmas.

Check out the full article here : 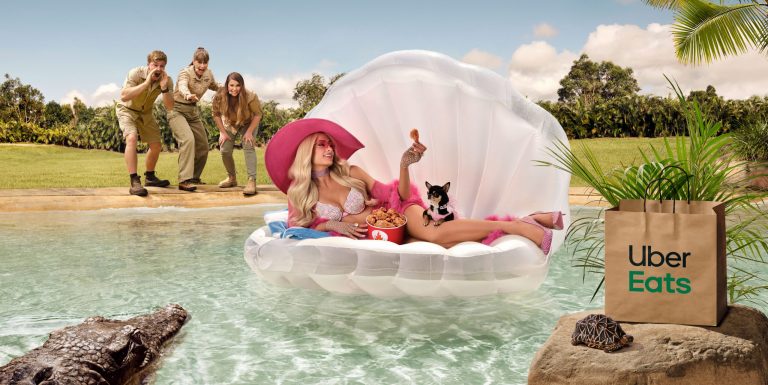 Our wildest ad round up to date. Buckle up!!!